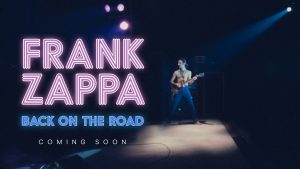 Eyellusion, live music’s premier hologram production company, today announced that it will work closely with the Zappa Family Trust to produce hologram performances of Frank Zappa, giving fans an opportunity to experience the prolific, eclectic and critically acclaimed music legend live in concert again. Production for the Zappa shows will kick off in late 2017, with performances announced later in 2018.

“I’m thrilled that Frank Zappa will finally be going back out on tour playing his most well-known music as well as some rare and unheard material,” said Ahmet Zappa, co-Trustee of the Zappa Family Trust. “We can’t wait to bring his creative work back to the stage with the musicians he loved to play with, such as Steve Vai, Ian Underwood, Adrian Belew, Arthur Barrow, Vinnie Colaiuta, Scott Thunes, Mike Keneally, Denny Walley, Warren Cuccurullo and Napoleon Murphy Brock among others who are committed to being part of this epic endeavor. When I spoke with them, they were excited at the prospect of performing alongside Frank once again and can’t wait to give fans an unforgettable experience.”

He continued, “Also, how radical would it be to have Moon singing ‘Valley Girl’ onstage with Frank? Or to see Dweezil side by side with our father playing dueling guitar solos? That would be my greatest wish and I look forward to bringing this special celebration of Frank’s legacy to a town near you. But if that wasn’t enough Zappa coolness, we’re also planning on staging Joe’s Garage The Musical with none other than Frank Zappa himself starring as the Central Scrutinizer.”

“Frank was an innovator and his art transcended so many different mediums,” said Diva Zappa, co-Trustee of the Zappa Family Trust. “He left behind such an extensive body of work and we want to celebrate his music with really creative and unique live hologram productions that will introduce his music to a new generation of fans and let so many that enjoyed his music when he was alive experience it again. We have had this idea for many years and after meeting with the team at Eyellusion, we knew that they were the right partner to make it a reality.”

“We work closely with the Zappa family on their various projects, and look forward to sharing new Frank Zappa performances with his longtime fans, as well as expanding his audience to give new fans the opportunity to share in that experience” adds Bruce Resnikoff, President and CEO, Universal Music Enterprises.

“We are thrilled to welcome such a monumental and important artist to our lineup of planned live music hologram productions,” said Jeff Pezzuti, CEO, Eyellusion. “Frank Zappa was an incredible musician, unmatched in his output, tackled so many different genres and influenced a generation of artists that would go on to help further shape rock and pop for decades to come. We are music lovers first and can’t wait to get to work on yet another show that lets fans experience such timeless and important music in a live concert setting.”

In addition to working with Eyellusion on the creation of a Frank Zappa hologram, Ahmet Zappa will join the Eyellusion team leading global business development. Ahmet Zappa is an entrepreneur, a marketer, film and television screenwriter, producer and a New York Times best-selling author. His creative work spans engagements with Walt Disney Pictures, Sony Pictures, The Jim Henson Company and Microsoft, on movies, graphic novels, the introduction of new characters and brands, breakthrough ad campaigns and more.

“I couldn’t be more excited to join the Eyellusion family,” said Ahmet Zappa. “There is a ton of untapped potential in this industry and I look forward to working with the team to build on the company’s reputation as the premier holographic experience company, creating new original content and guiding the company into new markets, including family entertainment.”

“Ahmet is a perfect fit for our growing team,” Pezzuti continued. “He is tirelessly creative, can work seamlessly across music and visual productions and is highly respected throughout the industry. He will play an integral role in all that we do moving forward, bringing significant value to all of our future engagements.”

Eyellusion launched publicly in 2016 at the Wacken Open Air heavy metal festival in Germany with its hologram production of Ronnie James Dio performing “We Rock” with former members of the DIO Band. It was the first time a rock artist performed via hologram with a live band, sparking considerable buzz that ultimately drove interest in a full world tour. The “Dio Returns” tour will kick off in November 2017 with 80 to 100 performances throughout Argentina, Australia, Belgium, Brazil, Chile, Colombia, Ecuador, Finland, France, Germany, Japan, Mexico, Netherlands, New Zealand, Norway, Poland, Romania, Spain, Sweden, United Kingdom, United States and Venezuela, with more countries to be announced in the coming weeks.