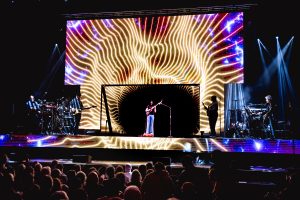 Legendary Rolling Stone rock writer Kory Grow was the first reporter to break the news about Eyellusion’s launch all the way back in 2016. He opens this great article about the booming hologram industry with his take on Eyellusion’s “The Bizarre World of Frank Zappa” show and features great quotes from fans who have seen it as well as Eyellusion’s execs, Jeff Pezzuti  and Ahmet Zappa.

A recent tribute concert dubbed The Bizarre World of Frank Zappa in Huntington, New York had all the markings of a concert by the rock iconoclast from nerdy fans geeking out about the night’s guitar players before the show to doo-wop intro music but with one marked problem: Frank Zappa died in 1993. The mustachioed musician at the center of it all, playing alongside erstwhile members of Zappa’s band, wasn’t a real person at all. It was a hologram.

To be fair, the apparition truly looked like an otherworldly version of Frank as it played guitar, adjusted its shirt, and wiggled its mustache. It sounded like him, too, since the audio came from an uncirculated 1974 live recording. It was enough of a spectacle that the packed house gave it a standing ovation. “At first, I felt a little sad,” a fan, Annelie Indilla, said after the show. “I got a little choked up for a second, because he’s not around anymore, but I just really liked it. It’s very unusual. It was very well done.”

But holograms have a unique growth opportunity. After seeing the turnout at their shows, the execs from both Eyellusion and Base think there’s room for a lot of growth, too… Eyellusion would like to expand how it presents its shows; Pezzuti’s dream is a David Bowie show that featured him in each of his guises, and he would also like to make it so he could potentially “stream” a hologram show in another country. Both companies have been in talks with representatives for living artists who want to expand their touring capabilities. “It’s infinite what we can do,” Pezzuti says.