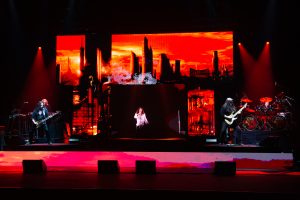 LoudWire’s, Chad Childers, came down to the Dio Returns press sneak peak in Los Angeles on May 26th! Chad got a chance to see what the Eyellusion team has in store for the Dio fans in 2019, and he was very impressed! He also got a chance to sit down with Eyellusion’s CEO Jeff Pezzuti, long-time Dio manager and widow, Wendy Dio, and the Dio Band!

The general consensus among those in the room was that the visual presentation went way beyond what was expected. During the preview, not only did we get Dio’s stage moves, look and vocals, but the technology allows Dio to be surrounded by some of the most trippy concert visuals that you’ll see. There are proper nods to Dio’s recording past, with plenty of visual pyro, smoke, dragons, demons and more that you just have to experience for yourself. From the performances we were allowed to see, there are also some pretty cool coordinated efforts pairing Dio’s stage moves with Simon Wright’s drumming. Simply put, it’s a visual feast for the senses, and with technology ever changing, could even evolve further in terms of what can be presented in the future.

As the technology is still somewhat new, there may be misperceptions about what this show is, but Pezzuti assures that they are all in to create an experience. “If we’re going out with a big show, let’s make it as fucking rock and roll and metal as we can make it and incorporate all of it,” says the Eyellusion chief. “It’s a bold move to try to change an industry that’s pretty much stuck in the mud when it comes to doing something new. So to go out in a live music setting and create a new kind of entertainment, it’s difficult. But when you see the results and you see people coming, even when we went out with this in 2017, the last three shows were sold out and we were averaging around 15,000 and they were coming based on what they saw on YouTube, which didn’t look anything close to what it looked like in person. This show is 20 times bigger and more intense and better.”
He continues, “You want to create that excitement again, something nobody’s seen, because at this point everybody’s seen everything. You’ve got the same bands coming out every summer doing the same show and a lot of those bands aren’t even changing the sets. So this is a new way to do something different, create a new buzz, and when you see the show you can see how much effort went into it.”